skip to main | skip to sidebar

To combat the level of distraction on our roads today, you can become an extra alert driver and save yourself from getting in accidents.

If you live in a congested city you see terrible examples of Distracted Driving at every turn, but no matter the size of your city, distracted driving is a threat to all motorists. To diminish your risk of being involved in an accident with a distracted driver you can take some simple steps:

1. Be focused on the road. Scan the road ahead and behind you for potential problems. If you see a problem make sure to honk your horn loud & long. People who are distracted aren't as responsive as those who are focused.

2. Look Left-Right-Left before you cross into an intersection. Distracted Drivers are more likely to run red lights and stop signs. Make sure you aren't in their path!

4. Watch the center line for Distracted Drivers who might drift over the line and hit you head on. If you are on a 4+ lane road, you may want to avoid travelling in the lane by the center line.

6. Also remember to watch for pedestrians who are texting & walking. They too have inattention blindness and sometimes step off the curb without even looking, or walk slowly across the street.
Bottom line: Continuously watch for Distracted Drivers...they are out there in abundance. Be safe and feel free to add additional Safety Tips in the comment secion below.
Posted by DontTwive at 8:26 AM No comments:

How Lucas Euser is making a Difference in Road Safety 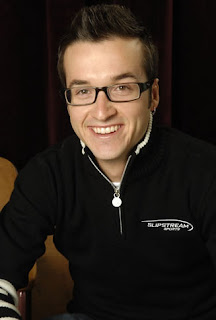 When Lucas Euser and I talked recently, he unveiled his plans to help improve Road Safety. We both agreed that Distracted Driving will not be solved by one person. It will take many. It will take an Army. An Army of people working on different levels relaying the dangers of distracted driving, educating youth, implementing laws and penalties that will be taken seriously, police writing citations, Moms and Dad talking to their kids about the dangers, friends reminding friends not to text and drive, PSAs galore, a continued massive attack of media reports, personal responsibility to not put people in needless danger on the roads...and then some.
Lucas is not only a speed demon on a bike, but a highly intelligent and motivated 26 year old. He detailed a well mapped out plan of attack on how to improve road safety near his US home in Napa Valley, California.
In what seems like an ironic twist of fate, the man who ignited Lucas’ passion for cycling via a mountain bike team, is the same man working side-by-side with Lucas to help improve road safety in Napa. Under-Sheriff John Roberston started Team NSO (Napa Sheriff’s Office) a junior mountain bike team, a division of S.A.L. The program was designed to “keep kids off the streets and get them active” as Lucas said. Lucas was hooked on cycling and transitioned from mountain biking to road and became a professional.
After Lucas’ cycling accident in Spain (See previous Blog Post), Lucas returned home to Napa to continue training. There he met with John Robertson and told him of his new passion: Road Safety. As the under-Sheriff, John Robertson was happy to team up with Lucas again to make a difference in road safety.
Lucas plans to start a Yield to Life chapter in Napa (Cycling and Road Safety for Cyclists created by teammate Dave Zabriskie). Additionally, with the help of the California Highway Patrol and John Robertson, they will design a program to teach new drivers the rules of cycling in addition to the rules of the road. “Whether they ride a bike or not, they will know the rules.” Too many auto/cyclist accidents happen because the driver isn’t aware of rules of the road for cyclists, or they are too distracted when they come upon a cyclist and don’t “see” them. Lucas said in most cases drivers “Don’t treat us as a motorist. We aren’t a vehicle and we don’t get the same respect.” Lucas & John Robertson’s program will teach young drivers a level of respect and understanding for cyclists that few people on the road have currently.
While a cell phone wasn’t an apparent factor in the accident that severely injured Lucas, he understands the dangers of cell phone use behind the wheel. He sees distracted motorists on a daily basis and says “The more you text and drive, your chances go up that something is going to happen.” Lucas has been a big supporter for @DontTwive, and knows his tweets can help bring awareness and ultimately save lives if people put their cell phones down and focus on driving.
Lucas Euser and John Robertson team up again! If their work with road safety nets the same results as their first partnership, then Napa will have some of the safest roads in the country for cyclists.
Lucas promised to keep us informed as they roll out the program in Napa. We’ll continue to follow Lucas’ career success as well as his success with Road Safety! Thank you Lucas for making a difference!
Posted by DontTwive at 10:00 AM No comments: